"With Passion and Compassion you can change the world"

21 and Able is an initiative through the United Way of Southwestern Pennsylvania that provides youth with disabilities a roadmap to employment and independent living after high school. 21 and Able partners with Giant Eagle, The University of Pittsburgh, FedEx Ground, and Allegheny County government to secure jobs for young adults with disabilities to gain valuable skill sets through a innovative employment model.

Josie Badger, a campaign manager for the #IWantToWork campaign in Pennsylvania and Advisory Committee Member of the 21 and Able initiative, will accept the award along with Bob Nelkin, CEO of the United Way of Southwestern PA.

Senator Bob Casey has established a record of results on behalf of the people of Pennsylvania. He was the prime Senate sponsor of landmark legislation for individuals with disabilities, the Stephen Beck Jr. Achieving a Better Life Experience Act (ABLE), allowing millions of families across the United States to save for the long term care of their loved ones with a disability in a tax-advantage savings account. The Associated Press hailed this legislation as “the most important new law for [those with disabilities] in 25 years.” Senator Casey believes that people with disabilities have a lot of ability and we must give those with disabilities the tools to succeed in the workforce and to live a full life. 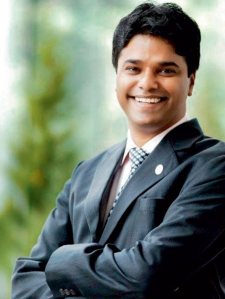 Ferose founded SAP’s Autism at Work (online) (.ppt) initiative after the diagnosis of his son. This groundbreaking program integrates people with autism into the workforce, and currently includes over 100 colleagues in Australia, Brazil, Canada, the Czech Republic, Germany, India, Ireland, South Korea, and the United States.

B.Tech in Computer Science (1993-97) at NIT Warangal; Falls in LOVE with his future wife, Deepali and learns more about LIFE than Computers.

Moves to Germany as Executive assistant to SAP Board Member, Gerhard Oswald

Youngest MD of a Multinational Company in India

Recognized by US Senator