My Hero, My Dad 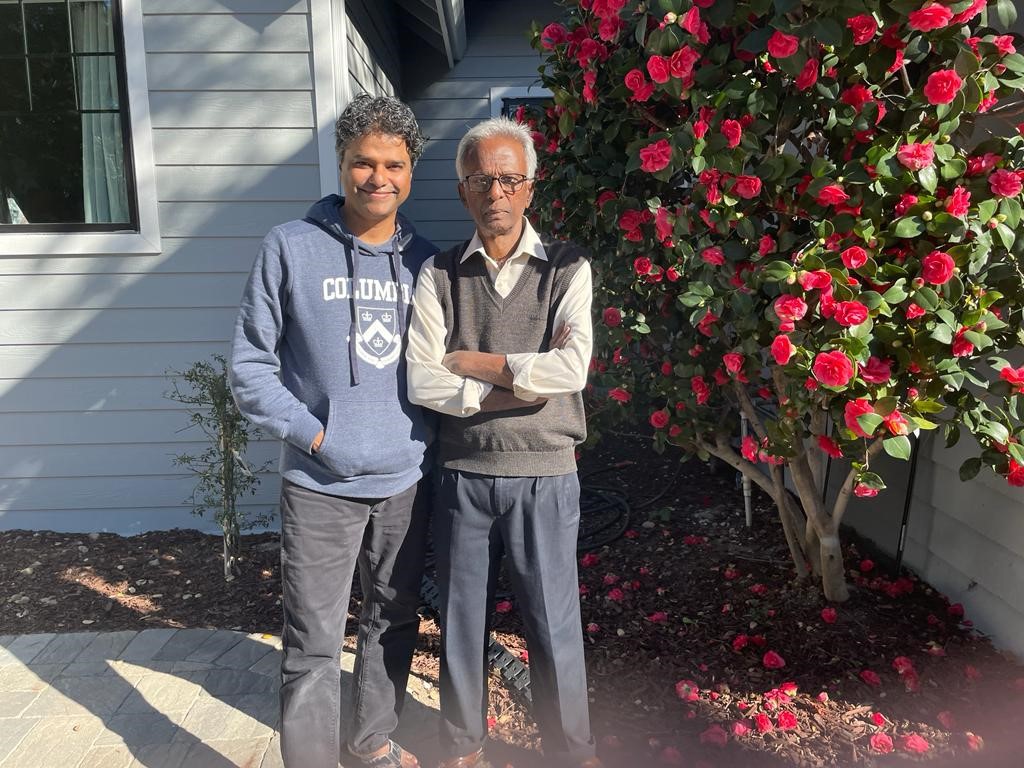 As my dad celebrated his 80th birthday with me in the US, I realized what a gift it was to lean into his wisdom. I thought, why not cheer him from the non-striker’s end, while we watch him bat towards his century!

So, without his knowledge (and without waiting for Father’s Day), I decided to put the spotlight on the most amazing unsung hero of my life, my dad — not that he needs or cares for any spotlight in the first place! During my 2021 Christmas break, I spent time chatting with him, especially during long car-rides. One of the questions I asked him was what keeps him awake at night. His answer was simple: bladder control, the cold weather, and being away from the hospital he built!

My dad V. A. Rasheed was born and brought up in Errattupetta (current population: about 60,000), a small town in Kottayam district of Kerala.He was one of the first people to venture out of our small town and join the Indian Railways in 1963. By the time he had retired, he had climbed through the ranks and become an IRS officer, received many awards including the prestigious Railway Board Award.

My dad is an eternal optimist and a problem solver — for all family conflicts, he is the go-to man. He seems to have an amazing ability to analyze every situation without blaming anyone. Of late he has become very impatient (I remember Vint Cerf telling me that once you realize you have less time ahead of you, you become impatient). He gets irritated when he messes up while handling the smartphone. His conversation with my mom has taken a comical turn: my mom can’t hear properly, and my dad speaks in a low voice, so most of the time they have no clue what they are discussing!

Every morning I wake up to the voice of my dad talking loudly to someone on the phone. On some days it irritated me so much that I had to tell him to close the door and talk. I wondered why an 80-year-old should wake up every day at 6 a.m. (PST) to have serious conversations with someone in Kerala. Once I probed him, I realized he was getting the daily updates of the hospital he had helped build a decade ago.

The Puthupalli Medical Center (PMC) is the hospital in Errattupetta that he helped build in 2011. Part of the unused 5-acre plot of Waqf land in Errattupetta was getting encroached upon by various people. (Land donated by philanthropists for any purpose recognized by Muslim law as religious, pious or charitable is controlled by the Central Waqf Council(CWC). The mosque committee was sensing that further encroachment might occur unless it put the land to meaningful use. The committee came up with four options: a multistory shopping complex, a school, a public auditorium and a hospital. The consensus was to build a hospital since it was a public need and also because raising funds for a hospital was more viable. Finally, the decision was made to build a hospital and a proposal was sent to the Central Waqf Council(CWC) in New Delhi.

My father is not a doctor, an architect or a fund raiser. He just used his gut, commonsense and vast experience as an officer in the Indian Railways to put together a proposal. The basic plan was to build a 50-bed hospital including operation theatre, lab, pharmacy, doctor’s consulting room, and other areas.

It was decided that the funds would be raised by donations from Errattupetta only. Fundraising proved to be slow and tedious. My dad accompanied by the committee members walked across the length and breadth of the town, knocking on the door of every possible house to share their plans. Some were welcoming, some were skeptical and some even mocked the idea, but overall people opened their purse-strings. The donations varied from Rs 1000 to Rs 1.5 lakh. Almost Rs 2 crore was raised through donations and an additional 50 lakhs was taken as loan from Waqf council to complete the first stage of construction.

Of all the challenges, the biggest one was to hire doctors who were willing to relocate to Errattupetta. Since it was a small town, the doctors had to be given the right incentives to move, and my dad had to convince them to do so by personally interviewing all the doctors.

The big day of the PMC hospital inauguration was 11 April 2011. The mood was celebratory. It felt like the entire town had come for a grand wedding. My dad was worried, though. Funds had got exhausted for the construction of the building and purchasing the equipment. Many committee members had used their personal funds to buy even the basic medicines needed to start functioning.

When Padma Shri M. A. Yusuf Ali was invited on stage to inaugurate the hospital, he was so impressed with the beautiful hospital that he announced a Rs 50 lakh donation on the spot (another 50 lakh was donated later). My father still recollects with childlike excitement that it was the best gift he ever received in his life. He was able to sleep peacefully knowing that they had no more debts to pay and could now focus on running the hospital efficiently.

In the last 10 years, the hospital has seen numerous highs and lows but it has maintained a steady income and good service. After repaying almost the entire loan of Rs 1.45 crores taken from the Central Waqf Board(CWC), it has made a steady profit and expanded its services to other areas (including COVID relief). It has already grown to 100 bed facility. A palliative care unit is being set up for the seriously ill patients, including free service to the very economically poor. Further expansion is on the cards. My father now plans to build a small library from donated books so that in-patients can read during their stay. With around 130 staff and 20 doctors, the hospital has supported the poor and needy in numerous ways. It is primarily seen as a low-cost, high-quality health center for the local community.


My dad feels honored and blessed to have spent 10 years of his retired life building a hospital from scratch and not earning a single rupee from it. He is grateful that he has been given the health and blessings of the people to serve his community in a meaningful manner. He hopes that the hospital continues to serve the people long after his time.

I have often wondered why we as a society have a fascination with the young and ignore the old. I am tired of reading “30 under 30” and “40 under 40” lists. Many of these people eventually end up not achieving their real potential (I have been part of these lists myself). We have a bias towards the early bloomers. Why not have an 80 above 80 list? Why not celebrate the wise ones who have lived a complete and full life?

When my dad was down with COVID in the US, he regretted not being in his hometown, where he believes the entire hospital staff would have landed up at home to take care of him! I don’t worry about his health even when he is far away from me, because I know that his healthcare is a concern for everyone around him. My father has earned his wealth in a different currency: people’s goodwill.

Even though he has had sleep problems for a very long time, at 80 years my father remains the healthiest person I know (touch wood). He has far fewer health issues than me at 48 years! I must confess I am not surprised. I have learnt the magic of his wellbeing firsthand — “when you give more, you live more”.