The Invisible Hand Behind A Whirlwind Book Tour 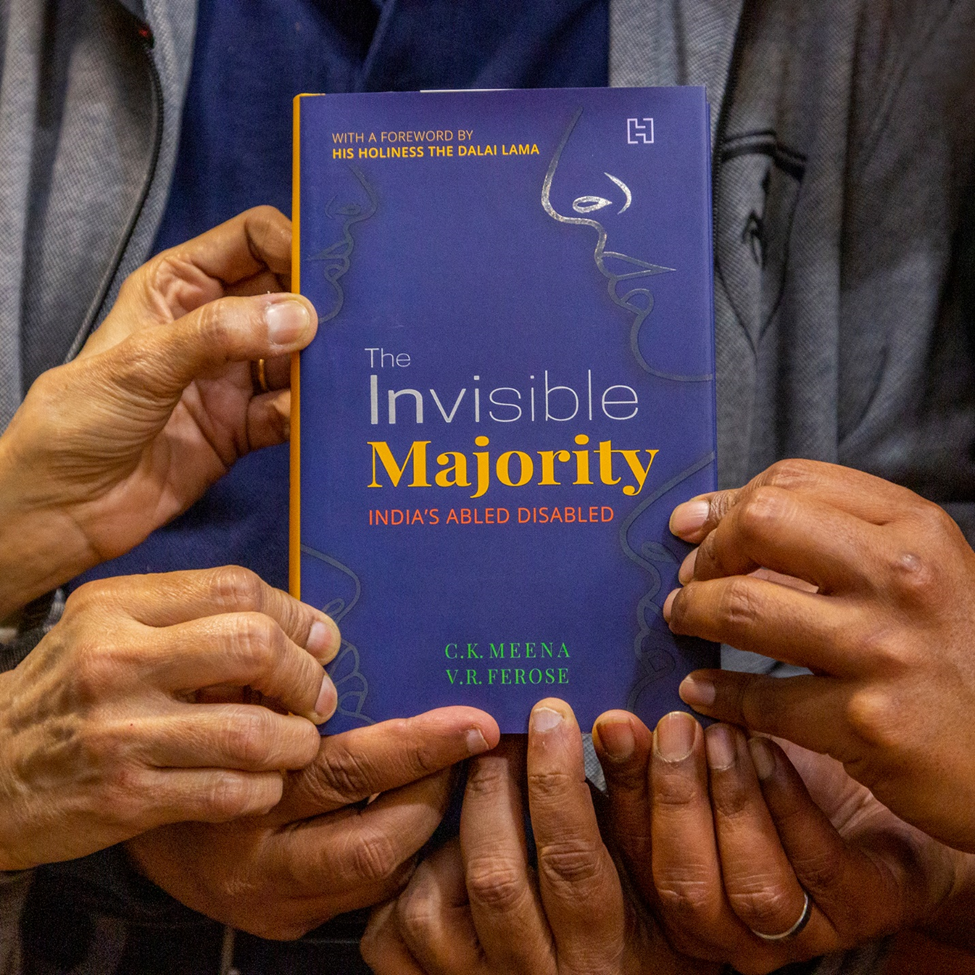 My book The Invisible Majority contains many stories of the invisible hand playing its part in the lives of people. I myself have been no exception to this phenomenon, for there have been many invisible hands that worked for the book and its mission. For instance, getting the Foreword from His Holiness the Dalai Lama was nothing short of a miracle. It must have been that same invisible hand that guided me through my book tour. The day I was to fly to India marked the outbreak of the Omicron variant of the coronavirus! And yet I managed to travel across cities, participate in multiple events and return home safe.

A week-long book tour to Delhi and Bengaluru was an excuse to meet friends, besides of course being an opportunity to speak about the book and share ideas on making the world a more inclusive place. When I had launched my first book Gifted, my co-author Sudha Menon and I had decided to divide and conquer the book promotion — while I focused on events in Bengaluru, Sudha focused on Pune. I could not travel to India for the launch of my second book Grit: The Major Story, so my co-authors Sriram Jagannathan and Major DP Singh launched the book in Bengaluru, following which DP turned into a one-man army dedicated to promoting the book. For my most recent book The Invisible Majority, my co-author C.K. Meena and I decided to do the week-long book tour together.

We converged on Delhi from three different points: I from San Francisco, Meena from Bengaluru, and Tanya Pradhan the book cover designer from Mumbai. I first headed straight for SAP Labs in Gurgaon for an interaction with the employees. Covid meant that most people had either moved back to their hometowns or got used to the remote work environment. Getting a full house of excited employees was a great start. It was a nostalgia trip that reminded me of my days there as the first Managing Director of the SAP Labs Gurgaon office. Some employees were still with the company after more than a decade and came to office just to meet me face-to-face. As the book had not yet been officially released (and not yet in bookstores), I had to get the books for the employees directly from the publisher.


It was teatime when I made my way from bookstore to book publisher — the office of Hachette India where the three of us were warmly greeted by CEO Thomas Abraham. Thomas was as usual a fund of information on the ins and outs of the publishing industry. After gaining some fascinating insights and feasting our eyes on some of the mouthwatering publications brought out by Hachette we left for the final session of the day.

It was a celebratory dinner at our hotel with around 30 people, many of whom were featured in the book. I shared a presentation about the book and our journey of writing it. It was midnight when we retired to my room with a smaller group for an hour of intense discussion about matters concerning the country and the social sector.

A symbolic meeting heralded the second day. December 2 was when we met the Vice President Shri Venkaiah Naidu at his residence on Maulana Azad Road to present a copy of the book to him, since he had written the Afterword. The protocol called for our spending more time on the prelude to the meeting than on the actual meeting! The VP graciously explained that since parliament was in session he had to leave soon and would not be able to spend more time with us.

The afternoon was spent at the India International Centre on Max Mueller Marg where the NGO Shikhar Organization for Social Development had organized an event around the book. The program began with a skit and musical performances by persons with disabilities (PwDs). Since the book would be officially launched only the following day, I thought this would be an excellent chance to invite a PwD featured in the book to share the stage with a person who had changed her life. This would also introduce a dramatic twist since Magsayasay award winner Dr Kiran Bedi was unaware of how she had played a pivotal role in the life of Ummul Kher, Deputy Commissioner of the Indian Revenue Services. Dr Bedi listened with rapt attention as Ummul narrated her story (on page 132 of the book) and was both surprised and visibly moved. It was an emotional experience for everyone in the audience.

We ended the day with a visit to the home of Padmashri Uma Tuli, founder of Amar Jyoti, one of the first schools in India to provide inclusive education. Dr Tuli had spoken about inclusive education at the India Inclusion Summit (IIS) of 2015 in Bengaluru and she enthusiastically recollected her experiences over the two days she had spent there. She and her family plied us with chai accompanied by specialty sweets (ghajak) from Gwalior (which has a branch of Amar Jyoti) before taking farewell photos with us.

On our final day in Delhi we had an elaborate lunch at Sanjoy Roy’s beautiful home in Gurgaon. Sanjoy is the man behind the Jaipur Literature Festival and we discussed how to make the book a part of the upcoming festival in January 2022. Before I boarded the night flight to Bengaluru, I met with my dear friend and the hero of Grit, Major DP Singh who also finds mention in The Invisible Majority.

The Bengaluru leg of my journey was short and intense. More than 200 people had come to the book signing and discussion at Bookworm. As a precaution against Bengaluru’s unpredictable weather the bookstore owner Krishna Gowda had put up a colorful marquee fit for a wedding reception! The rain gods were kind, however, and we had an uninterrupted event. Personally, it felt like a mini India Inclusion Summit(IIS) since I met many friends who have been an integral part of the inclusion journey. Here is a short video of the event.

The finale was a corporate event with drinks and dinner at The Oberoi, organized by Allegis for a closed set of inclusion champions. Allegis has been at the forefront of hiring PwDs and boasts one of the most passionate groups of volunteers in their organization.

As I flew back home, the entire week was whirling around in my mind and it took time to process it all. While I felt relieved that the book is now behind me, I am also eagerly waiting to get feedback from the readers.