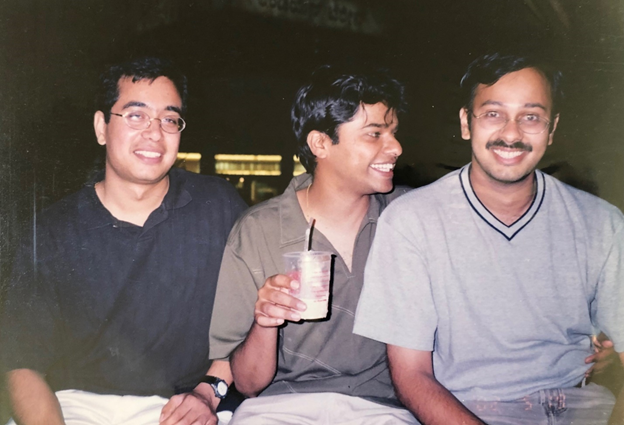 It was the summer of 1994. A year had gone by in my engineering course. I had done reasonably well enough to secure a scholarship (given to the top 25 students in the college). It meant that I was viewed by the studious kind as a potential roommate. Vivek K S and Karthikeyan V looked every bit the topper. Wearing specs with thick lenses, they were always engaged in topics around computer science, rarely swore, and showed little interest in girls. We were all vegetarians from South India, so we went to the same mess as well as the same class.

I was an accidental topper during my first year in college. The momentum of my school discipline carried over into college and helped me secure good marks. I wasn’t particularly interested in computer science or even in engineering. My elder brother did engineering from IIT Kharagpur and so I was expected to do the same.

The tradition was that in the first year, 4 people from the same state would share a hostel room and from the second year onwards, people would choose whichever roommates they preferred and stay three to a room. Karthikeyan and Vivek asked if I would be their roommate. My decision to agree was simply based on the fact that both seemed genuinely nice guys. And I knew I could do with some tutoring in computer science. Our journey as roommates started from Room Number 5–2–7 and moved to Room Number 5–3–11.

Six-footer Vivek was a gentle giant. He was the only grandchild of his doting grandparents who visited him often. Vivek spent all his time at the computer lab. He was the favorite of everyone from the professors to the girls, always helpful, and very good at cracking bad jokes. For computer novices, Vivek was god, the go-to man before and after computer lab. He loved his food as much as he did computing. Just before the exams, he would open his textbooks for the first time, sometimes nodding off while reading, and yet come out with flying colors. I still haven’t figured out how he effortlessly mastered such complex formulae and algorithms. Vivek’s other interest was washing his clothes on the weekends and diligently hanging them in the room.

Karthikeyan was an introvert and spent almost all his waking hours on his chair with his PD board (PD was college lingo for a flat board which we placed on our laps for holding books). He would meticulously go through every textbook, also working out the exercises at the end of every chapter. He would fill notebooks working out every complex algorithm, even writing on the obverse side of printer papers (printed on line-printer). He was consistently in the top 3 in a class of 60 (he secured a scholarship every year). He lived his life to study. His commitment to academics was unwavering even though everyone around him was busy doing everything but studying.

During the final-year exams, he lost his father. He was so committed that he finished his exam before going home for the funeral. I have seen him lose his temper only once in 4 years. And that was when he wanted some notebooks and the store guy sent him away saying he did not have change. I remember Karthikeyan storming into the room and fuming as he proclaimed, “He is a menace to the entire human civilization!” That’s how much the work sheets meant to him! As for myself, I don’t think I needed too many notebooks or even textbooks!

My corner of the room had a poster of actress Sonali Bendre. Vivek’s corner had some colorful wallpaper which made no artistic sense. Karthikeyan did not need any wall decor, so he was in the middle. When the three of us spent time together, we cracked jokes and occasionally discussed the girls in our class. None of us smoked or drank alcohol (a rarity in hostel). With no devices to distract us we had only each other for company. Going out for dinner or a movie was the only source of entertainment, given our meager means. It meant a ride in an auto, normally with 5–6 co-passengers (the cost per head was Rs 3). And then we watched the weekly Philips Top 10 and X Files on TV — the only two programs that drew a full house in the entertainment room in our hostel! We spent 2 years as roommates and by the time we graduated, Vivek and Karthikeyan remained at the top of the class and I had slid to the bottom. But we remained friends and well-wishers for life.

It was the summer of 2021 and I was moving house. During the move, I opened some of my old photo albums. And this picture made me nostalgic for my roommates. I created a WhatsApp group, shared the photo and decided to call both Vivek and Karthikeyan. We caught up over a Zoom call.

Vivek is now working for Google. After graduating from NITW, he graduated from IISc and did his MBA from IIMB. Early on in his career, he was part of India’s foray with Simputer. Then he built a multibillion-dollar business in Amazon. His son is in 8th grade and daughter in 12th.

Karthikeyan is now working for Accenture in Toronto. His passion for knowledge has not diminished. He did him MBA from IIM B and is now pursuing his PhD in Machine Learning. He spent more than 15 years at Infosys (Bengaluru and later South Africa) and then at IBM. His son is in 9th grade, daughter in 6th and has a pet cat. Both haven’t changed much though both have lost some weight. It’s ironical that both showed no interest in sports during their college years, but Vivek is now into running and Karthikeyan into swimming. Both have remained humble to a fault.

Life has come full circle after 27 years. Our kids have grown up and will soon be looking for their own roommates.