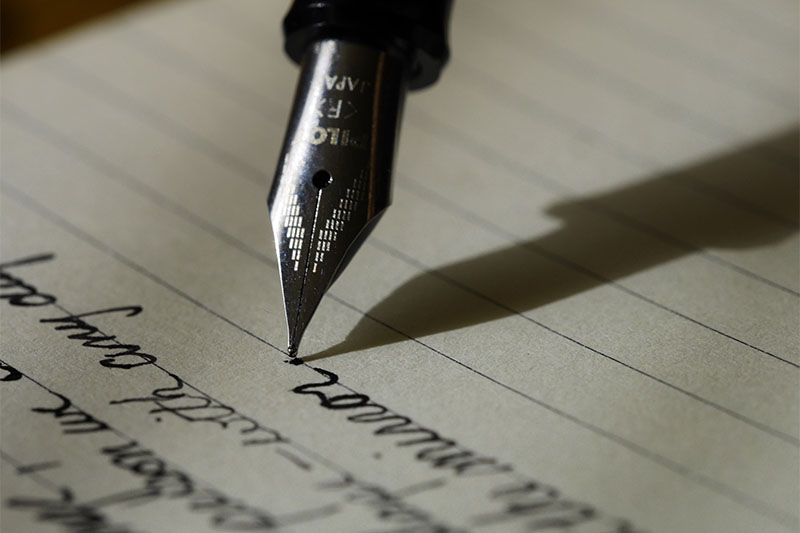 Biographer and Pulitzer Prize–winning author David Herbert Donald wrote a stunning portrait of Abraham Lincoln’s life and presidency in Lincoln. Interestingly, David Herbert lives on Lincoln Road, in the city of Lincoln, Massachusetts and has a Lincoln bust in his room surrounded by Lincoln books!

One of my favourite writers is Doris Helen Kearns Goodwin who is an American biographer, historian, political commentator and author of No Ordinary Time: Franklin and Eleanor Roosevelt. She creates an environment in her home office that evokes the period she is writing about, surrounding herself with period memorabilia – posters, art, books – and playing the music of that era while she writes.

To focus on their task, some writers have eliminated every sort of distraction, including their clothes!  Victor Hugo, the famous author of Les Misérables, often asked his servant to take away all his clothes for the day and leave his own nude self with only pen and paper, so that he could do nothing but sit down and write. Nobel Laureate Ernest Hemingway wrote nude, standing up, with his typewriter about waist level, while Mark Twain wrote lying in bed. Mystery writer Agatha Christie could write anywhere, including in the bathtub! Poet and activist Maya Angelou used to rent a hotel room to write in.

So, what are the habits and idiosyncrasies of writers? How do they inspire themselves to perform a task that is lonely, intense and singular? What are the tools they use to research and write? Where do they write? How do they select a topic? How do they overcome writer’s block? These are the questions that I asked my author friends and I got very interesting insights.

Pico Iyer, author of Autumn Light and the forthcoming A Beginner’s Guide to Japan said, “Like any petitioner or votary, hopelessly petitioning some wayward god, every writer is a slave to rite and superstition, not to mention blind faith. Though not so superstitious in my regular life, I am completely a creature of habit when it comes to my writing. I spend the first five hours of every day at my desk, even though on many days I achieve nothing at all and often go backwards. For decades now I’ve been using the same black Pilot Razor Point pens and the thick high-quality paper I buy from Staples. I stop after exactly 300 minutes and know when to stop without even looking at my watch. I never drink anything after 6 pm, and like many an athlete, I go to sleep at 8 pm., since sleep is the one factor that determines whether I am fresh enough to have something to say the next day or not.”

Graeme Simsion, author of The Rosie Project, first works on the premise of the story. He writes one idea on each 4-by-5-inch index card every day, accumulating around 200 cards in six months. He then takes another month to sort the cards and create a cohesive story. That’s when he is ready to start writing. His routine: “Get up in the morning, read what I wrote the previous day, spend 15 minutes to 2 hours to improve it, write and elaborate on at least one card a day, then go for a 5 km walk, thinking about those cards and scenes. By the end of the walk I have good ideas. I write 1000-1500 words every day, no writer’s block. In 60 days I have written a book! I send the book to 10 people who are my first readers, asking them to mark any passages they are tempted to skip, which I then delete. Five more edits and the book is done.”

Personally, I have often retreated to my office-cum-library whenever I needed inspiration, often gazing at books for long periods of time. As spare time is limited, I write whenever and wherever I can, mostly during long flights, often taking notes on my iPhone. Most of my columns are written in quick spurts of inspiration and imagination, though the final piece requires multiple fact-checking, research and editing.
Eventually, writing is about discipline. All prolific writers have their own playbook. Stephen King writes six pages every day, while Haruki Murakami gets up at 4 am and writes for five to six hours before taking a break. C K Meena, journalist and author of Black Lentil Doughnuts, strikes a different note, however. “Journalism demands routine and discipline, and I turn to fiction purely to escape this.

Except when I wrote my murder mystery I’ve never planned meticulously. No publishing deadlines, so no rigid timetable; never had writer’s block either. Something I’ve read, heard or overheard sparks off an idea and then I begin, tracing the barest outline of a plot and filling it in as the story progresses. My novels are driven by characters; I flesh them out in separate Word files in such great detail that their lives find a permanent space in my head. Therefore I can take long breaks and slip back into my writing as smoothly as if I’ve never left.”

In the end, writing is about putting pen to paper (or fingers to keyboard). As the veteran New Yorker columnist E.B. White said, “A writer who waits for ideal conditions under which to work will die without putting a word on paper.”