Barry Morrow And The Oscar That Changed The World 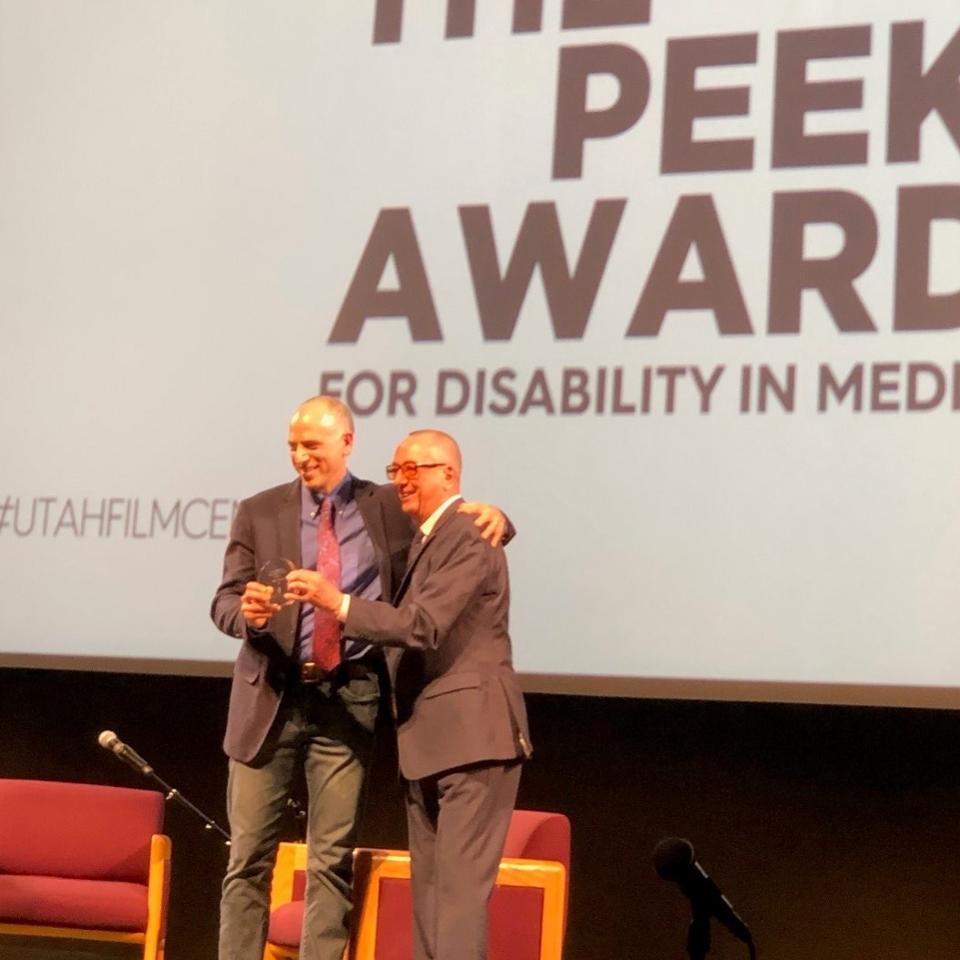 The Peek Award was created by Barry Morrow, who donated his Oscar to Salt Lake City in memory of Kim Peek, the savant on whom Dustin Hoffman’s character in ‘Rain Man’ was partly based. Peek passed away in Salt Lake City in December 2009.
VR FEROSE[/caption]

The Oscar won by screenplay writer Barry Morrow for Rain Man is the most travelled Oscar in history! With over 3 million miles to its credit, the Oscar has been held and photographed by more than a million people across the world. It is the only instance in the history of the Oscars of someone giving away his precious trophy.

Barry Morrow has rarely has seen his Oscar since it was handed to him on March 29, 1989. Because shortly after, he gave it away to Kim Peek, the inspiration behind the role played by Dustin Hoffman. And the trophy remained with the Peeks and travelled with them on all their speaking engagements which promoted the cause of people with special needs.

It’s been 30 years since Rain Man won 4 Oscars including Best Original Screenplay for Morrow. The highest earning movie for MGM has had a more profound impact than can be measured in terms of dollars. It put the spotlight on People with Autism, specifically savants, of whom Peek was one.

I was fortunate to meet Barry Morrow on World Autism Awareness Day (April 2) this year at Salt Lake City, where we shared the stage for our talks. I also got a chance to hold the coveted Oscar statuette!

Morrow, who was proudly celebrating his 50th wedding anniversary with his loving wife Birdy that day, is a rare individual who has kept himself away from the trappings of Hollywood. He has been passionately but inconspicuously championing the cause of people with disabilities.

Morrow said he created the character of Raymond (which sounded like Rain Man, hence the title) after meeting Kim Peek; his characterization was inspired by both Peek and Bill Sackter, his (Morrow’s) good friend who was the subject of Bill, an earlier film that he wrote. On the casting, Morrow said he was not convinced at first that Tom Cruise (25) and Dustin Hoffman (50) were right for the lead roles since the age difference was too high for both to be seen as brothers. However, on the last day of the shoot, when he saw the duo coming down the elevator wearing similar striped tuxedos, he felt they both couldn’t be more like brothers.

I was intrigued to know what made Morrow the person he is. How could he bring home a person like Bill Sackter, who had spent 42 years in a mental asylum (although he later attained fame across America, won awards and was invited to the White House)? How could he shrug off Hollywood fame and remain a simple and grounded person? How could he just give away his Oscar?

“It has to hurt a little bit,” said Morrow when I asked him whether he didn’t sometimes wish he had the Oscar with him. He recalled how Kim and his father had visited him after the Oscars. “Kim asked to hold my Oscar, and then spent the rest of the day carrying it with him everywhere we went, as if he was holding a baby. He just loved the Oscar more than me, so I let him take it.” The Peeks brought it along with them on all their global tours, and Morrow quickly realized the power it had to help bring awareness and acceptance of people with disabilities. So instead of asking for it back, he encouraged the Peeks to hold on to it.

One of my key insights is that sometimes, it’s not what you give that matters but what you are willing to give up. And in this respect, Morrow has been influenced by his father, who used to give away things spontaneously. Once when an old lady did not have enough money to pay for her shopping at the grocery store, his father quietly dropped a $20 note and acted as if it had fallen from the lady’s bag. Young Barry was angry at how the lady picked up the money without acknowledging his dad. When he went outside she was waiting patiently to profusely thank his father. And Barry learnt one of the greatest lessons from his father: “Giving has to be spontaneous; don’t expect anything in return.”

Morrow, who’s now 70, says the statuette, which he formally gifted to the Peeks’ home state of Utah in 2008, has been making its way through China this past year. He shares stories of the Oscar passing through the airport check-in, where the security personnel invariably ask him to remove the Oscar and then excitedly take selfies with it. He said the statuette even got him a seat in a Boeing cockpit once.

Morrow said, “There’s not much gold plating left where it’s been held by the waist, and its head has dents from being dropped. A few years ago, when I saw all the wear and tear and asked Kim what had happened to all the gold, he responded, ‘It’s on the hands of the children.’”

The Peek Award is given out by the Utah Film Center and pays tribute to artists, media makers, and film subjects who positively impact society’s perception of people with disabilities.