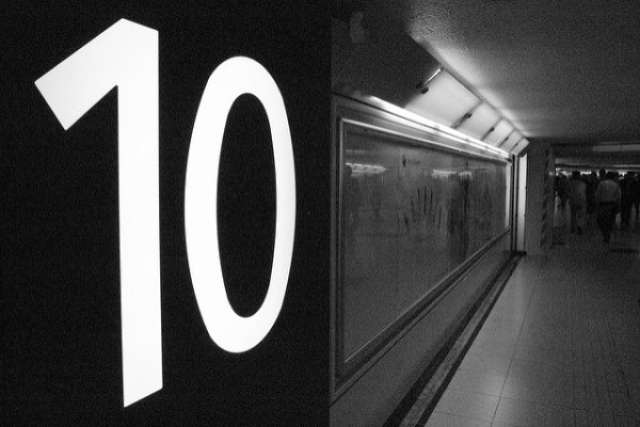 And who among us can resist making a list of our own, our favourite movies or books, and share it with friends and colleagues? There is something in us that makes us want to list our experiences and rate them. Whether it’s places we visit, airlines we use or restaurants we patronise, we feel compelled to list them in the order that we like or dislike them. For instance, the New York Times bestseller list that comes out every Sunday is one that I religiously follow.

Lists have been dismissed by some critics as too limiting or constraining, often excluding something noteworthy. More critically, lists are thought of as too subjective. But that’s perhaps the most fun aspect of either checking out a best-of or worst-of list or making one yourself. Your personal preferences get in there, and that keeps the list from being too judicious and dull. There’s space for surprise in a subjective or personal list – you’ll encounter a movie or a book or a restaurant that you’d never considered seriously before. But now you feel tempted to give it a try.

Most interestingly, best-of and worst-of lists invite polemics, debate, discussion, argument, passion. One of the most fiercely argued lists is the ‘all-time greatest films’ list that Sight and Sound compiles every decade. The film magazine invites film critics from all over the world to send in their lists and makes an aggregate from the order of ranking. For several decades, Citizen Kane stood on top, and then suddenly it was Vertigo! The latter was always seen as a masterpiece but still as a light work because it is a thriller, while Citizen Kane was seen as tackling serious and larger themes. But Vertigo slowly crept in, inching closer and closer to the top, and when it was ranked the greatest film ever made, it sparked a lively debate.

In the world of books, especially where collectors are concerned, literary lists that have been put out over the years, particularly in the twentieth century, have had a deep impact. The numerous “100 best books” lists became a kind of canon to follow in what to collect. So you had collectors chasing after first editions of these canonical books.

One of the most influential lists has been the Modern Library list of 100 best novels. What’s interesting about this list is that it has two components – the official list selected by the board of the Modern Library edition and the reader’s list. Here is a comparison of the five best novels from each category:

The first list is more orthodox and literary, the second is more populist and personal. As a collector or a reader, you can pick one list over the other, according to what you feel is closer to your taste.

Talking of taste, the best-of lists were also supposed to be, traditionally, the way you acquired the right taste. Let’s say you have just become a serious reader and are wondering what to read in the vast ocean of books out there. The Modern Library list comes to your rescue by saying: ‘Here are the 100 best novels ever written; start here.’

While that is good enough, many of these lists display a Western or European bias. What about all those brilliant books from South America, Japan, India, China and so on? Only those written in English make the cut, despite the existence of excellent translations of books in other languages. Still, where English and American books are concerned, the Modern Library list is a fair one.

While collecting my 50 best cricket books, I went by the lists that were put out by author and historian Ramachandra Guha. If I were to make my lists, they would be ‘The 50 Best Books by Nobel Laureates’, ‘The 10 Best Books on Autism’, ‘The 10 Must Read Books on Technology’ and even ‘The 10 Most Influential Leadership Books’. A number, for some reason, gives a definitive context to a list.

Similarly, sports fans may build their teams. A cricket fan may build his or her World XI. I remember when Don Bradman announced his all-time best team, it drew interest around the world. The book Bradman’s Best by Roland Perry was widely read and debated.

These are the areas I have some knowledge in, and when you feel intimately about something, you feel an urge to define it by a list. Why? Because it can help, guide and illuminate others who are interested in these areas as well. Lists can be powerful.

Sometimes, books appear in lists because of an external event. Nowadays there has emerged, quite suddenly, talk of George Orwell’s 1984. This book was once widely read, but in the last 10-20 years, especially after the year 1984 came and went (and the things Orwell had predicted had not entirely happened), it wasn’t referenced as much in the media nor was it part of many lists. But after Donald Trump became President, the book (and the movie) began to be mentioned more often. This has resulted in the sales of 1984 suddenly spiking up, and more discussions on the work have followed. Why? Because Orwell’s totalitarian scenario looked like it could be a real possibility with Trump.

The New Yorker magazine, in a parody, made a list of all the great lists, a one-stop reference for consulting any possible list that was made about any possible thing. In another New Yorker piece, Maria Konnikova made many insightful and funny observations about our attraction to lists, including grocery lists! She notes, “Lists tap into our preferred way of receiving and organising information at a subconscious level; from an information-processing standpoint, they often hit our attentional sweet spot. Lists also appeal to our general tendency to categorize things—in fact, it’s hard for us not to categorize something the moment we see it—since they chunk information into short, distinct components. This type of organization facilitates both immediate understanding and later recall. Because we can process information more easily when it’s in a list than when it’s clustered and undifferentiated, like in standard paragraphs, a list feels more intuitive. In other words, lists simply feel better. But the list’s deepest appeal, and the source of its staying power, goes beyond the fact that it feels good… the so-called “paradox of choice”: the phenomenon that the more information and options we have, the worse we feel. Likewise, we feel better when the amount of conscious work we have to do in order to process something is reduced; the faster we decide on something, whether it’s what we’re going to eat or what we’re going to read, the happier we become. Within the context of a Web page or Facebook stream, with their many choices, a list is the easy pick, in part because it promises a definite ending: we think we know what we’re in for, and the certainty is both alluring and reassuring. The more we know about something—including precisely how much time it will consume—the greater the chance we will commit to it. The process is self-reinforcing: we recall with pleasure that we were able to complete the task (of reading the article) instead of leaving it undone and that satisfaction, in turn, makes us more likely to click on lists again…”

I once knew a collector whose focus or obsession was to collect the books put out by various ‘best of’ literary lists. He started with a list of the 100 best Booker books and for five years did not rest until he had every one of them. I recall once when I accidentally ran into him in a bookshop, he told me he had all but one of the Booker books, and begged me to keep an eye out for it on my book-browsing trips.

Later, he even began making his lists! Some of them were quite absurd – such as his ‘best of India Today’ list. He made a fetish out of the magazine! He would on a Sunday trawl through all the wares of pavement hawkers in Mumbai, looking for landmark issues of the magazine.

This example shows us that ‘list-making’ can become a trivial pursuit; we should beware of making it pedestrian. The lists one should create or pursue ought to be seductive – not just to you, but to all aficionados of The List. The List should reveal the wonder, beauty or power of the things you list – the 10 greatest jazz albums, the five most memorable Word Cup games, the 50 best Indian novels, and so on. What these lists do – subjective though they might be – is offer the most exemplary instances of the best or the greatest in a crowded field by a connoisseur of the subject.