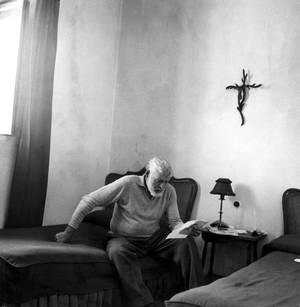 You need more than money and passion to get hold of books signed by Nobel laureates. You need a lot of luck

It was a visit to the Nobel Museum in Stockholm in 2004 that got me thinking of collecting signed books by Nobel laureates. I recall the moment vividly: I happened to notice the chairs in the museum were all signed by laureates. The tradition of signing chairs apparently happened quite by accident — when the then President of U.S., Bill Clinton, visited the Nobel Museum in 2001, a staffer scribbled ‘Bill Clinton’ under the chair the President had sat on. Now, the place has over 220 chairs autographed by laureates.

The chairs play twin roles in the museum: one, they serve as guest logs, cataloguing the signatures of the Nobel Prize winners who visited, and two, they are objects of daily utility, sat upon by hundreds of visitors as they take their lunch or coffee break at the bistro.

Ever since I saw those chairs over a decade ago, collecting books signed by winners of the Nobel Prizes for literature and peace became my passion. My collection has now risen to 62 books. Those signed by recent Nobel winners are relatively easy to get hold of; but locating signed copies of older and famous winners — Martin Luther King, Rabindranath Tagore, W.B. Yeats — have proved quite a challenge. It took many years, money and luck, but I was able to add them to my collection.

The moment the winner’s name is made public, my mission to find a signed book begins. The price of the book begins to climb within an hour of the announcement.

The Nobel laureate who has fascinated me the most is Tagore. Growing up in West Bengal, I was strongly influenced by his prose and poetry. I got my hands on a signed copy of Gitanjali, one of my all-time favourites, after years of searching.

My interest in Yeats comes from the introduction he wrote for Gitanjali. An inscribed copy of Yeats’ Three Things has been one of my most precious possessions for many years.

Ernest Hemingway’s The Old Man and the Sea is a classic I have re-read many times and I decided I just had to have a signed copy. But any rare edition of Hemingway is an expensive collectible (I once saw a first edition for a whopping $10,000 at a Tokyo bookshop). When I found a pencil-signed edition of For Whom the Bell Tolls on eBay, I did not let it pass.

I had seen my father read Pearl S. Buck’s The Good Earth, when I was a child. And to my surprise I found that books signed by Buck are relatively inexpensive and easy to get hold of.

Pablo Neruda is my wife’s favourite author and over the years I too developed a fascination for his work. Eventually I found something signed by him. Later, a copy of Siddhartha, signed by Herman Hesse also came my way. My most recent acquisition is a signed edition from this year’s winner of the Nobel Prize for Literature, Kazuo Ishiguro.

Money and passion alone are not enough — you need luck too when it comes to finding these books. And recently, I’ve had some of that. Keen to get hold of a signed copy of I am Malala, by Pakistani activist Malala Yousafzai — the youngest Nobel Prize laureate — I decided to attend one of her talks, hoping to get the author to sign my copy. But there was no chance of that — the security arrangements were tight, with no room for book signing. A few days later, quite out of the blue, a bookseller I patronise handed me a copy of the book — and to my delight, pasted in it was a bookplate signed by none other than Malala.
Ferose’s fantasy is a house where the library is the centrepiece and,
the bookshelves with rare books, its masterpiece.