The Joy Of Autism 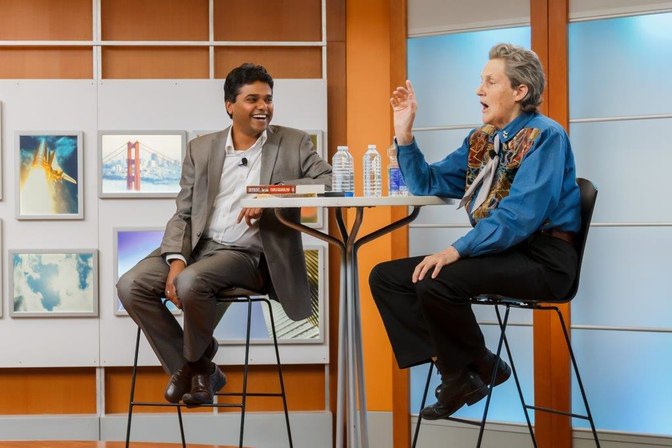 Every time I’ve had to leave my son to travel on work, the truth of the above statement has struck me forcefully. My wife has to deal with my son’s anxiety and resultant tantrums, all by herself. For a non-verbal child on the autism spectrum, it is a challenge to express one’s feelings. It’s been several years since he has been bogged down by these constraints in communicating, and I am still unable to understand the pain that he undergoes. Temple Grandin once mentioned, “Screaming was the only way I could communicate.”

Since the diagnosis of my son’s condition I have traveled around the world trying to meet experts in the field to understand the condition a little better, hoping it would enable me to better understand my son in the process. I have been extremely fortunate to have met some of the most accomplished people in the world, who have immensely contributed to making the world a better place.

In my humble opinion, Temple Grandin, Thorkil Sonne, Simon Baron Cohen and Steve Silberman are the most influential thinkers on autism studies. They are the ones who have significantly impacted the way our world views autism. And I have been privileged and lucky enough to meet all of them! In my own quest to understand autism better, I was determined to have an audience with these brilliant, gifted people.

“Everybody is good at something,” said Thorkil Sonne, a statement that has now become the tagline of the annual India Inclusion Summit in Bangalore. It was a missed opportunity to meet Thorkil at Bangalore that made me take a long flight to Denmark to meet him in person. Since then, Thorkil has inspired me, both at a personal as well as professional level. From inviting me to join the board of the Specialist People Foundation to attending the World Economic Forum in Davos together to being part of the Global Autism Innovation Roundtable, I have had the good fortune to learn from this humble leader. Sonne, a father of an autistic son, has become the most famous advocate for employing autistic individuals to derive business benefits, especially in the software industry. His mission of a creating a million jobs for people on the autism spectrum has pushed some of the largest multinationals—Microsoft, HP, SAP and Google to hire technical professionals who are on the autism spectrum. Being part of this mission has been the most fulfilling experience of my life and I owe it to Sonne.

“The world needs all kinds of minds” is the title of Temple Grandin’s TED speech that has a viewership of more than two million. Temple is a global icon. She was the first autistic individual to become a celebrity. In the book An Anthropology on Mars, the late Oliver Sacks wrote about Temple Grandin in the full breadth of her humanity. She is capable of joy, whimsy, tenderness, is passionate about her work and has exuberance and longing. He acknowledged that Autism is “foremost a disorder of affect, of empathy” but also explored Temple’s deep sense of kinship with other people with disabilities, and animals. Anyone who has a remote association with autism will have read her book or watched her movie.

Thanks to Thorkil, I was connected to Temple and was able to get an appointment to meet her at Colorado University (where she teaches). My 36-hour travel was every bit worth the two-hour lunch meeting I had with the iconic personality. During and since that meeting, I have asked her various questions to understand what goes inside the “autistic brain“ (which also happens to be the title of one of her many books on the subject of autism).

My most memorable moments with her were when she spent some time at my house where we chatting on various topics and when she did a talk at my workplace in Palo Alto, in the SAP Labs office. One interesting exchange that pops to my mind was about her travel diary. I had noticed that she always kept making notes in a small diary that also including her entire travel schedule. So I asked her what would happen if she lost her diary. “I have a back up,” pat came her reply! Temple has provided me with deep insights which act as my basis of understanding an autistic mind. Without a doubt, she is one of the most fascinating persons I have met.

“Autism is a continuum and everyone is on it,” is one of Simon Baron Cohen’s famous quotes. A British psychologist and a professor at Cambridge University, Simon viewed autism as “an extreme variant of male intelligence” and linked development of autism to high levels of exposure of testosterone in the womb. He is the one of the most gentle and soft-spoken persons I have known. His own personal journey of having a sister with disability ignited his path to becoming the foremost researcher in the field of autism. When I met him in London, I had one of the most enlightening discussions. Since then, I have met him at SAP, where we have collaborated with Cambridge University to employ students on the spectrum. His theory that “autism is an extreme male brain” is a radical idea and he has pioneered the study to link autism with parents on the STEM (Science, Technology, Engineering and Mathematics) background.

“Autism is not an epidemic and there is no tsunami, as it is made out to be,” claimed Steve Silberman in his final remark to me, after a two-hour-long conversation at Café Reverie in San Francisco. Silberman’s Neurotribes, since its release in 2015, has gone on to become a New York Times bestseller, winner of the Samuel Johnson prize and one of the most complete books on the history of Autism and the future of Neurodiversity.

While he offers a gripping narrative of research pioneers Leo Kanner and Hans Asperger, he also explores the game-changing concept of Neurodiversity, the idea that autism, dyslexia and attention deficit hyperactivity disorder (commonly known as ADHD) are not errors of nature or products of the toxic modern world but the result of natural variations in the human genome.

Steve breaks the myth that autism is connected to vaccines. He believes that the increase in parental age and possible environmental reasons are the factors behind the increase in occurrence of autism. It took Steve Silberman 80 hours a week for five years to write the page-turner Neurotribes, every page of which is worth a read and in my opinion, the Bible of autism!

When I discovered that my son was on the autism spectrum, I did what has come most naturally to me since I was a child—I began reading intensely on the subject. Reading is a form of curiosity for me. It’s the key I use to open mysteries, and thus, it was while hunting for books on autism that I discovered there was a vast treasure trove of wonderful and helpful books on the subject. Since there are too many such books and articles on Autism, the challenge for parents with children on the autism spectrum (and even for those academically interested in autism) is sometimes being able to find just those handful of noteworthy books that could comprehensively illuminate their understanding of the topic.

This is where I think I could be of some help, if you want to understand Autism. Below is a list of my personal Top 10 books on Autism.

I kept wishing people would write more about the fun of having a child with special needs and one day came by Laughing and Loving with Autism, written by R. Wayne Gilpin (erstwhile president of the Autism Society of America) and father of a young man with autism, which made me see the beauty of having a special child!

I hope that this list proved useful and offers us what we most need: hope, clarity, love and the strength to deal with autism.

Long before all these contributions in terms of research and writing, if there was one thing that created awareness about autism, it would have to be the Academy Award winning film Rain Man. By putting one autistic person on screen, the makers of Rain Man had made innumerable others visible—to their loved ones, to their neighbours, to their teachers and doctors, and to themselves. It showed that autism existed and it was OK and maybe even desirable to be autistic. Rain Man, in every sense, was the tipping point for the cause of autism.

I have been fortunate to have stood on the shoulder of giants. While the journey continues, I hope I am able to say on my last day, “It was a useful life!”