Books are my best friends 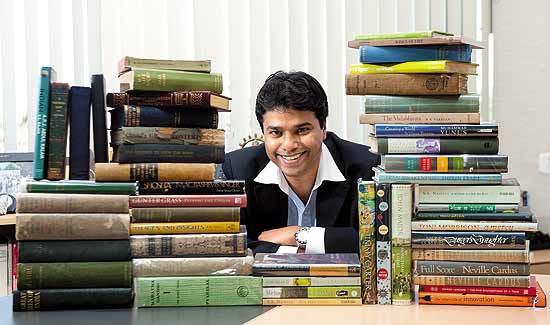 There’s a lot that VR Ferose, MD of SAP Labs loves to share with you when you meet him for a cup of coffee. From work to his hobby that he is rather passionate about, the conversation veers smoothly through a myriad topics that give quite a clear perspective on what makes him tick in this wired world…

“Today, there’s really no differentiating between work and life beyond work. There’s a thin line that separates the two and I don’t look at any activity I do outside work as mutually exclusive,” notes Ferose to our initial poser of what he does beyond the 9 to 5 routine.

“The mistake people make is compartmentalising things as work and play. I think the smart thing to do is to find ways to overlap the two,” he observes.

Yet, as the focus is on his favourite activities, Ferose holds forth and says, “I spend a significant amount of time reading and writing.” Owing the habit to growing up years, he reminisces, “Books were always there and my father would subscribe to Reader’s Digest when it was the only magazine available.”

Then on a lighter note he jests, “I don’t collect books merely to fill shelves but to genuinely learn. I read books everywhere. In fact, you’ll find 4 -5 newspapers in my car along with a pile of books. I won’t say I read them… I ‘consume’ them.”

But where most bookworms enjoy their hobby without any agenda, picking books impulsively, Ferose goes one step ahead. “I collect books on a theme,” he says, citing how he spent the last two years collecting “biographies and autobiographies of Nobel Prize Winners personally signed by them.”

“I focused more on the Nobel Peace and Literature award winners” he elaborates before informing that he’s “managed to collect 27 books that meet the criteria.”

The excitement is palpable when he especially reveals that he’s managed to get personally-signed copies of books on Nelson Mandela, Dalai Lama and Desmond Tutu.

Getting personally-signed copies of books seems like a particular fetish of Ferose, because in all, he has “collected 500 author-autographed books.” What’s more, in this pursuit, Ferose has managed to create a network of the faithful — namely friends and other collectors, who get the books signed for him by their authors or who inform him about a rare copy.

One such book that came by, and the one that he counts as his ‘most prized possession’, is “an antique book that had WB Yeats’ signature on it. The next theme Ferose has trained his mind on is, “getting signed books of the 10 greatest sportsmen of the world, including Pele, Pete Sampras, Federer and Maradona among others.”

His self-evident love for words today now also sees Ferose turning into a writer. “I am in the process of writing two books,” he informs. While the first book is on leadership and transformation the second book delves into “creating hunger in paradise — where you have bright people and a lot of facilities, but what you strive to do with all the wherewithal at your disposal is the question you’ve got to address.”

A self-admitted workaholic who used to work till he fell ill, Ferose today is a much relaxed tech-head who firmly believes that one should “take your job and not yourself seriously.”